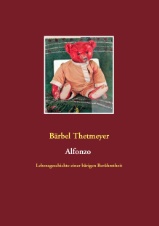 Bärbel Thetmeyer is writing stories about teddy bears, bunnies, rabbits and more. She started writing back in the 1990ies. These first stories were meant to be special Christmas presents for the family kids.
By the time the stories were published as print editions at BoD. Since the new media e-books appeared on the market, her books are also available on Kindle as e-books and on iTunes.
In 2012 she made the acquaintance of a wonderful English lady who became the editor for the first translation. She started what she calls 'my big translation adventure' and in December 2012 her first ever-English book was published at BoD: Little Beaver Secrets.
Her aim is to enrich the fantasy of her readers of all ages and to give them a little escape from the cruelty of today world! Come on and join in!
Last year she started to translate the bunny stories of her first book. The first three out of seven Bo Bunny Stories 1, 2 and 3 was published at BoD in 2015.
This publication presents the last four stories.