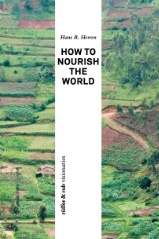 How to Nourish the World

How to Nourish the World

"A world with enough food for all, produced by healthy people in a healthy environment." That is the vision of Hans R. Herren and his foundation Biovision. The foundation is active in the development, dissemination and application of ecological methods in Africa, with a focus on preparing information. By passing on practical expertise and exchanging knowledge, Biovision increases the self-reliance of those living in Kenya, Uganda, Tanzania and Ethiopia and improves their understanding of the environment. Its grassroots projects, such as the prevention of malaria and income generation through the cultivation of medicinal plants, improve people`s lives and serve as demonstration and training projects.

In 2013, Hans R. Herren and and his foundation Biovision were awarded the Right Livelihood Award, also known as the Alternative Nobel Prize.

Dr Hans Rudolf Herren, born in 1947 in Switzerland, is one of the world`s leading scientists in the field of biological pest control. He lived and carried out research in Africa for 27 years. In the 1980s, he successfully controlled the mealybug threatening the cassava plant, one of Africa`s staple foods. From 1994 to 2005 he ran icipe, the International Centre of Insect Physiology and Ecology,
in Nairobi, Kenya.
icipe plays a central role in the management of pests, parasites and diseases in developing countries. Dr Herren has been awarded various prizes for his research on behalf of humanity, and in 1995 he was awarded the World Food Prize, the only Swiss recipient to date. In 2013, he and his foundation Biovision were awarded the Right Livelihood Award (dubbed the "Alternative Nobel Prize"). Other awards include: One World Award 2010; World Food Prize 1995; Kilby Award 1995; Brandenberger Prize 2002; Tyler Prize 2003; Foreign Associate of the US Academy of Sciences 1999; and Member the Academy of Sciences for the Developing World (TWAS) 2005.