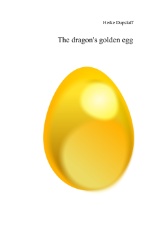 Every dragon carries a golden egg inside himself. Though most of them do not know about it because it lies hidden underneath several layers: thick, thin, shiny, grey, velvety, spiky, light and dark ones.
Some dragons do suspect that there is something inside them. Something quite real and unique. Then they begin taking the layers off. Until their golden egg appears. If they are brave, they let themselves speak through their golden egg, and stray. To themselves.

Heike Dupslaff comes from a small town in North Rhine-Westphalia in Germany. At first she followed the classical path, which was not her own. Business management training, language studies, work in the free market economy. When the inner calling became louder, she set out on the path to her self. Beginning with a world trip, and ending up moving to Berlin. Today, she applies her authentic capabilities to supporting people, who also wish to journey to themselves, and speak disarmingly honestly.