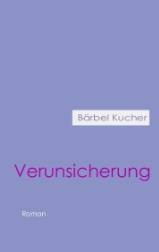 Bärbel Kucher: Born in 1959 in Guben, later engineer studies and various activities in industry as an engineer and in between engaged in a cultural institution. After the fall of the Berlin Wall, she continued further training and worked in law firms.
First sketches and studies in early adolescence, one of which was published. Years of studying literature with minor writing. It was only in 2013 that she decided to start the first book "Uncertainty" and finish it in 2014.
She also works as a colour-style image consultant.