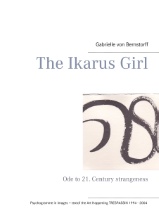 The Ikarus Girl, daughter of the Architect of the Labyrinth, flies with wings made of feathers and wax. Both wanting to escape imprisonnment on Crete, the Ikarus Girl ignores her father's warnings not to fly too close to the sun, or else the wings might melt and she might drown in the sea. The Ikarus Girl does just that.

The text is made up of multiple voices of this flight and fall of not only the Ikarus Girl.

The Black Square, most intimate and at the same time most iconographic painting of modernity is perhaps the only horizon left in the face of such hybris.

The texts are accompanied by aquarells, an hommage to Malevich's Black Square painted by Gabrielle von Bernstorff for the 100 anniversary of the Black Square in 2015.

Gabrielle von Bernstorff is an artists, architect and writer living in Zürich Switzerland since 2009.

In 1994 Gabrielle participated in an Art Happening calledTrespassing that extended over a 10 year span beginning in Hamburg and comin to a close in Zürich.

The texts are impressions from this journey which took Gabrielle across the US and different parts of Europe.

The Texts are accompanied by Re-Interpretations of Malvich's Black Square (1915). Gabrielle believes each one of us shares a destiny with a work of art. Hers is The Black Square. The Hommage to the Black Square by Gabrielle von Bernstorff was painted in 2015 in Zürich.