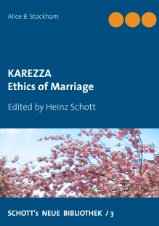 Ethics of Marriage
Stockham, Alice B.

Alice B. Stockham took 'KAREZZA' from the Italian term 'carezza' meaning petting or gentle stroking. Because of birth control as well as 'spiritual exaltation' she pled for a radical change of sexual behavior. She was convinced, that there was a tremendous difference between the usual copulation ending with orgasm respectively ejaculation and the sexual merging according to the Karezza technique without a climax. In spite of the 'sexual revolutions' during the 20th century her Karezza method has been generally ignored until today. But it may give men and women a chance to control the sexual drive by means of their own mental power which can be successfully trained.

Heinz Schott is an Emeritus Professor of the History of Medicine at the University of Bonn (Gemany). He published also the BoD books (in English):

Stockham was the fifth woman in the U.S.A., who got the degree of a Medical Doctor. Apart from her special field gynecology and obstetrics she was engaged in charity and interested in spiritual topics. She also practiced homeopathy, fought against alcoholism, served probably sometimes as a trance medium and was an active feminist, a suffragette. She adhered to the so called New Thought Movement. In 1886, she joined the first course on Christian Science organised by Emma Hopkins in Chicago. Leo Tolstoy, a personal friend of her, was so impressed by her ideas that he that he initiated a translation of her book "Tokology" into Russian and wrote a preface. She is an outstanding figure in the history of the life reform movement regarding sexuality as a spiritual challenge in particular.