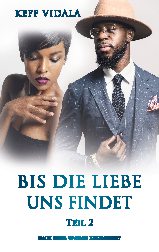 Kerfala "KEFF" Vidala was born in Kinshasa (Democratic Republic of Congo). At the age of nine he fled to Germany. After finishing primary school, despite some problems, he attended the Theodor Heuss secondary school in Herten, where he successfully completed the course.
His first book, Bis die Liebe uns findet (Until Love Finds Us), was published in September 2016 in Germany. The young author financed and published his book from his own resources after 36 publishing houses had rejected it. Despite that his Self-Publishing books were so successful that his guide: 5 Räume (5 Rooms) eventually reached 21st place on the Spiegel-Bestseller List.

In 2019 he received a publishing contract with Ullstein Germany.
But his book series Until Love Finds Us remains Independent

Besides that, in 2019 he set up his own podcast: 'KeffTV', that will go online on Spotify, Youtube and Apple Podcast.

Further books by the author:
Bis die Liebe uns findet, ( Until Love Find Us) Part 2 & 3
5 Räume ( 5 Rooms - by Ullstein Germany ) (Guide for dealing with the pain of separation and increasing one's self-love)

Until love finds us