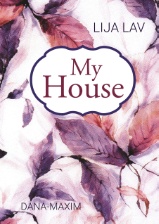 My House is real story based on true biography and described the importance of own home and liberty.
The book is firstly written in serbo-croatian language because all facts and the story is important sign of terrible circumstances of war in Bosnia 1992 - 1996

Oljana Laganin, was born in Banja Luka on July 25, 1968 as the first child of mix marriage between Croatian mother and Serbian father. In Banjaluka she had graduated the primary school and grammar school. Shortly after graduating from the Faculty of Economics in Banjaluka, he had been employed in the "Toplana" as a Head of Accounting. She was faced with the fear within a short time in Bosnia when she has been in her most prettiness of youthfulness and idealism. She decided to visit Munich immediately before the war, and from that time on, in 1992, she could not return. In 2008 she begins with writing a biographical novel "My Home" that was published in 2018. As the best student of her generation at the Grammar school she edited the school newspapers and participated in the playoffs. Writing and journalism have always been great satisfaction and success to her. Today she is employed as an administrator in the American company "GORE-TEX" with a successful knowledge of more than four foreign languages. She continues to participate actively in the theatre and the newspapers.