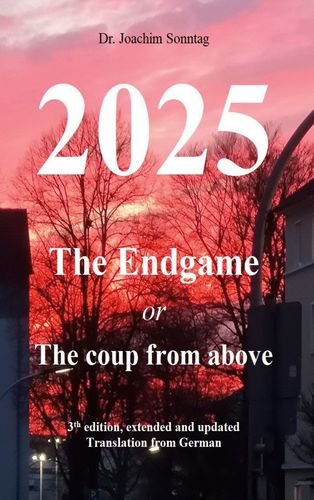 or The coup from above

Mehr erfahren
Beschreibung
These three documents, Weather War document, Future warfare, Population figures of the countries, authorized by US Air Force, NASA, CIA, FBI, DARPA, ... all indicate the same endgame year: 2025. The year of the planned establishment of the New World Order (NWO).
Artificial intelligence, Transhumanism, Geoengineering, Nanotechnology, Genetic engineering, Mass psychology, Manipulation of consciousness, Bioweapons and 5G serve to control and manipulate the population and to secure the transition to the NWO. The "Corona flu" in 2020 is used to spread fear and panic among the population to make them accept the massive reduction of civil liberties.
The young generation expects a worse fate than the war generation of 1939-45, if we don't fight back.
Fate has a name: Transhumanism & 5G. Is there still a chance of stopping this process?
Autor/in

Dr Joachim Sonntag studied physics at the Technical University of Dresden. From 1972 until 1989 he worked at the Central Institute for Solid State Physics and Materials Research in Dresden specializing in electron structure in metallic alloys. He then moved to Dortmund and worked for HL-Planartechnik GmbH as a developer for temperature and radiation sensors. Joachim Sonntag specializes in radiation physics, multi-phase alloys and nanomaterials, for which he has published a number of foundational works in leading international journals. From him came the formulas/theory on thermoelectric force (2005; 2017), on the Hall Effect and Giant Hall Effect (2016) and on electron redistribution in composites (1989) (details: www.sonntag-physik.de). At the beginning of 2019, together with two other colleagues, he published his most recent article, a specialist review with the title: Electronic Transport in Alloys with Phase Separation (Composites): https://www.scirp.org/Journal/PaperInformation.aspx?PaperID=90216