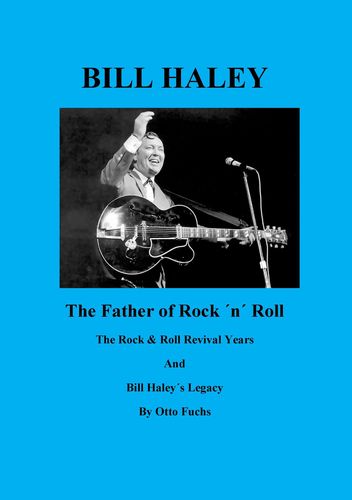 Mehr erfahren
Beschreibung
The greatest accomplishment of Bill Haley & His Comets lies in their paving the way for all the other artists that followed.
From 1952 until 1960, Bill Haley & His Comets scored 30 hits in the US and UK charts. In 1957, at the beginning of Bill Haley’s first UK tour, he was greeted by 4,000 fans at London’s Waterloo train station. The following year, his 1958 European tour included appearances in Germany, (which began approximately three weeks after Elvis Presley was shipped there, courtesy of Uncle Sam) and caught the attention of the international press. The Haley concerts held at the West Berlin Sportspalace erupted in mass rioting and became a daily news item. The East German newspaper “Neues Deutschland” condemned him as “the rock & roll gangster, Haley celebrating an orgy of American un-culture. ”The West German periodical “Rheinische Merkur” reported: “he, of all people, the Comet of instinct-unchaining started a major offensive against taste, standing and self-respect. All that in the bishopric of Essen on the day of the Papacy vote”.
The Soviet paper “Pravda” declared him, along with rock & roll, as “a secret weapon of the west against socialism”, whereas the FBI under the infamous J. Edgar Hoover (best known for his wiretapping of anyone whom he viewed as “suspicious”) started an investigation into theories and accusations of what was feared and suspected as “communist music”. Asa Carter, head of the “Alabama White Citizens Committee”, charged the National Association for the Advancement of Colored People (NAACP) with seducing and corrupting white teenage girls by promoting rock & roll. He is quoted as saying in 1956, “with its basic heavy beat of the Negroes, it appeals to the base in man; it brings out animalism and vulgarity”. He then promised to initiate a “…campaign to force radio stations and jukebox owners to boycott this immoral music”. Perhaps the culmination of all this hysteria, however, was the opinion published as the headline of the prestigious New York Times on March 28th 1956: “Rock & Roll Called ‘Communicable Disease’” in which the Hartford, Connecticut psychiatrist Francis Braceland declared rock music “cannibalistic and tribalistic”, claiming, “…it is insecurity and rebellion. It impels teenagers to wear ducktail haircuts, wear zoot suits, and carry on boisterously at rock & roll affair”. While classical cellist Pablo Casals described the music of Bill Haley in the 1950s as the “distillation of all disgust of our time”, the German music expert Barry Graves (recognized equally in the cultural circles of Berlin and New York) in hearing Haley’s style during the first rock & roll revival at the end of the 1960s conversely declared, “The definitive rock & roll style (is) blended from country & western, Dixieland-jazz and rhythm & blues”. Haley himself, taking a calm, confident and somewhat more level headed approach, explained “I thought if I were to take a Dixieland melody and leave out the emphasis on the first and third beat, but emphasize the second and fourth, and add a beat to which the listenerscan clap or even dance – that would serve their wishes. The rest was easy – I took catchy phrases like ‘Crazy Man, Crazy’ and made songs out of them with the method I just explained.” On February 9th, 1981 Bill Haley died suddenly of an apparent heart attack at his home in Harlingen, Texas. He was only 55 years old. What occurred before, during, after, and in between the many successes and phases of Bill Haley’s career? What was actually behind the professional image of “the star” Bill Haley? And what led to his untimely death at the relatively young age of 55? These are a few of the questions that this book shall attempt to address. And perhaps one more can be answered in the process: WHO, really was the man who invented rock & roll?
Autor/in