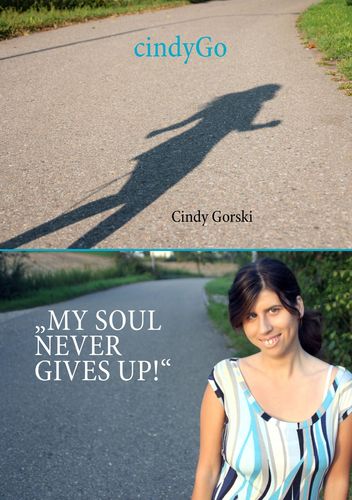 CindyGo - My soul never gives up!

Mehr erfahren
Beschreibung
Your child will never be able to sit up, walk, speak, read or write. She will never be able to live independently. Cythomegalovirus is a disease that can destroy brain cells.” Such was doctor’s verdict about Cindy Gorski’s chances. Yet Cindy is living with her „physical and mental challenges“, as they are formally known. She has grown into a young woman and has overcome all the constraints. And now she has written a book about the challenge she faced and the struggle for a normal life. She always wanted to be a “normal” girl and be accepted as such. And she succeeded!

In her autobiography, the reader discovers the familiar sides of a typical teenager who listens to music, hangs out with other girls and argues with her brother. But, at the same time she has been a fighter. From early childhood she has pursued her dreams and her goal of independence. Therapies did help, but above all it has been her incredible will power, and determination to achieve her goals whatever the occasional setbacks. “Whether I am faced with any challenge or whether it’s the way I look – that’s not for others to judge. Because that’s the way I am.”

A must read
Autor/in