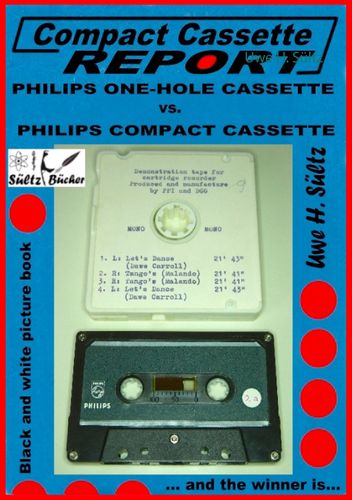 Mehr erfahren
Beschreibung
It was probably like a crime thriller. The Americans knew nothing. The Japanese knew nothing about it. Not even the two works of PHILIPS in Vienna and the Belgian Hasselt knew anything from each other.
In Vienna they were working on a hi-fi single-hole system. With the single-hole cassette they had experience in the field of dictation systems. Now a high-quality system for private use should be developed. Among them were GRUNDIG, the PPI (PHILIPS Phonographic Industry) and the DGG (Deutsche Grammophon Gesellschaft). The tape was 3.81 mm wide, as was the two-hole system. This two-hole system was developed in Belgium by Lou Ottens. It all began in the early 1960s. A system should be presented for the radio exhibition in 1963.
The two-hole cassette had both coil winders in a compact housing. The single-hole cassette required a second winding reel. This was integrated into the device, which made it bigger. A withdrawal in the meantime was not possible. There was also no second page. The compact cassette was simply more compact. She had two game pages and a withdrawal was possible at any time.
Thus the PHILIPS management decided for the compact cassette. To be more international in the future, they were called Compact Cassette.