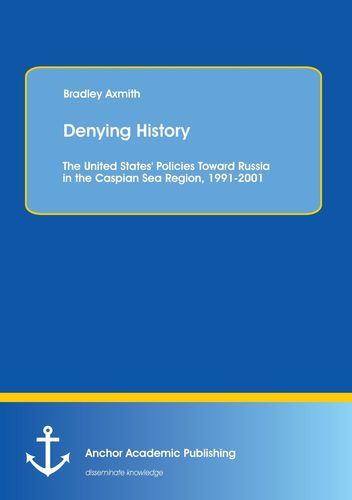 Denying History: The United States' Policies Toward Russia in the Caspian Sea Region, 1991-2001.

Mehr erfahren
Beschreibung
The historical record seen through Offensive Realism presents evidence illustrating that the United States' approach toward the Caspian Sea region between 1991 and 2001 was governed by idealistic principles rather than balance of power considerations. That was led by the false notion that democratic Russia would act in accordance with US goals.
The United States denied the competitive nature of international politics, refusing to criticise abuses by Moscow in the region, and failing to intervene when US interests were marginalised. The US failed to prevent Russia from refashioning conditions conducive to the re-absorption of the Caucasus and Central Asia as a sphere of influence; nor did it account for China’s expanded role and trajectory as a challenge to US power. This analysis shows, for example, that Russia’s proximity and willingness to use force exceeded the capabilities of the US’ use of its global predominance to shape regional events.
Autor/in

Bradley Axmith is a freelance writer, translator and blogger. He has studied classics and political science, dabbled in archaeology, and is building a Viking ship. Bradley Axmith is doing research for authors, and appears in the occasional online publication providing analyses for current affairs. Currently, he is working on the comparison between the Arab Spring and the European Spring of 1848.