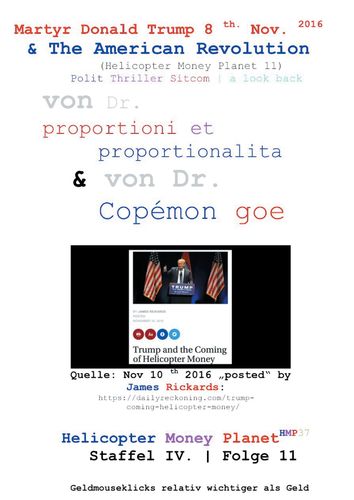 Mehr erfahren
Beschreibung
After our half_illegal Guerrilla Underground Version (Helicopter Money Planet 10) {The system is ´pacioli_manipulated´} {the system is ´pacioli_rigged´) ... and the ´8 th. November´ ... the Polit Thriller Sitcom ¿?¿ ... is back in normal fairway. Okay, in these wild ´transistion times´ / changeover times (from Nov 8 th. 2016 ´14 Juillet 2053) happen a lot of things ... and happen more things than someone could follow it all. And the ´two and half actors´ ... are Putin, ´tct´, Alex Jones, Julian Assange, Melania, Dr. Copémon goe and ´Ivanka´, Edward Snowden, ´Hillary´ & ´Huma´, and ´half men_Barron´ ... and et au-del some ´Verkehrsgäste´. Yes ´tct´ (trump_catalyst_trump) is a communication genius principle ... combined with an excellent keynes-general judgement ... and the powerful ´fingersnap power´ of a ´global system changer´. Yes ... tct´´s central 2016 election campaign slogan .. ´the system is rigged´ ... has been not only an election campaign slogan, but is likely to be more, namely ´the sad truth´ ... <<< and precisely ´the sad truth´, which is scientifically verified by the online-mathematical ´Helicopter Money ALGRORITHM´ ... which has only recently been rediscovered ... yes, namely after Milton Friedman (Nobel Prize 1976) had derived it ´in the summer of 69´. Yes, the difference is: in the last century: helicopter money was ´pacioli_bookkeeping_handmade´ money ... and in this century ... helicopter money is ´geldmouseklickpeople_algorithm_smartphone_made´ money. And this means, helicopter money ... ´the king´´s discipline in the world_highest keynesian spheres of economic money abstract mathematical logics ... has more changed and more elaborated and ´upgraded´ ... than even ´the whole University´ ... than even ´the whole world´ ... than even the whole ´Internet´ ... <<< and now it is conceptionally so far mature ... namely so far mature ´to recognize it .. as the royal road´ ... ... which transcends the 21 st. century from the medieval age (´Pacioli Noch-Mittelalter´) into science fiction. Yes, everyone can understand it ... < precisely because in the age of Science Fiction ... the two elements ... namley the ´Artificial Intelligence´ and ´the Money´ ... merge into a synonym ... and as everyone is interested in the former ... ... ´APP_understands´ consequently the latter. Yes ... ´the tct-effect´ (trump_catalyst_trump) ... is a worldwide unique ´moderator-effect´ .
Autor/in