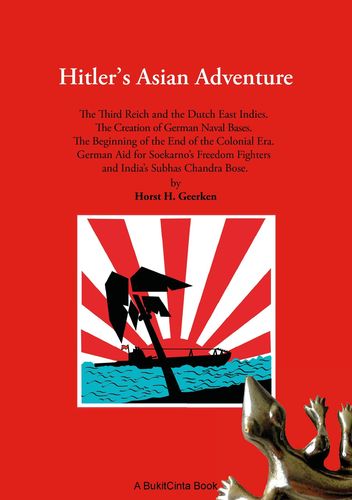 Mehr erfahren
Beschreibung
From 1963 to 1981 Horst H. Geerken lived in the new-born Republic of Indonesia, at a time of upheaval after the end of almost 350 years of colonial rule and exploitation by the Netherlands.
In both his professional and private activities he constantly came across German, Japanese and Indonesian eyewitnesses who had lived through the Japanese occupation and the presence of the German navy in Indonesia. The relations between the German Reich and what was then the Dutch East Indies were obviously closer and more varied than had been previously assumed. Hardly anyone was aware that Hitler was extremely interested in this distant archipelago and that thousands of German officers and seamen were in action in East and South-East Asia. Who knows that German U-boats and auxiliary cruisers penetrated deep into the Pacific and that the German Navy used the Kerguelen Islands in the South Polar Sea as a secret base? Or that Hitler gave massive support to the independence movements in Indonesia and India? Many of the German naval personnel chose to make Indonesia their home after the war and joined the Indonesian freedom fighters.

The Second World War heralded the end of the colonial era in Asia, especially in South-East Asia. The role played in this process by the Third Reich should not be underestimated.

The collaboration between the Axis powers, especially that between German and Japan, with all its problems, is also investigated. There was a lively exchange of new weapons technology. There was even the re-creation of a German Radar system in Japan under the management of a German engineer.

Documents from the Third Reich's Foreign Ministry, published here for the first time, show how brutally and inhumanely the German men, women and children in the Dutch internment camps in the East Indies were treated by their captors. These documents are supported by evidence from contemporary witnesses.

The author has encapsulated his many years of research in the two volumes of Hitler's Asian Adventure. It is a fascinating documentation of the German Navy's involvement in a theatre of war that has until now been neglected by historians.
Autor/in