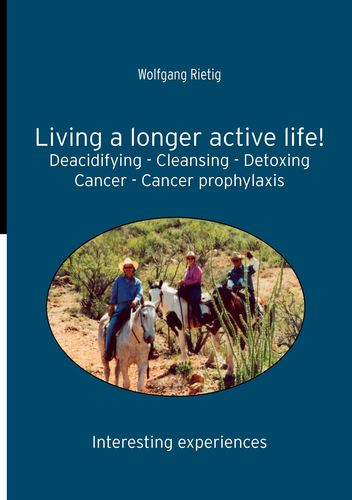 Mehr erfahren
Beschreibung
How can we live longer actively in a world, where the flood of toxins and electro-smog pushes us to the limit of unbearable stress? One does not read or hear much about the deeper causes which effect acute and chronic illnesses, let alone the scourge of humanity, cancer. As far as we know, human cells can divide up to the age of one hundred and twenty. If man doesn’t die before that due to other reasons, then usually from organ failure which is triggered by an excessive accumulation of waste and toxins in the organism. The earlier a person knows about the processes, the greater the chance of introducing the right steps to counteract the disadvantageous development. Every person can introduce the necessary measures to become healthier overall and to break trough the vicious cycle, for him or herself. Everyone can introduce the necessary measures for an overall better state of health and breaking through the negative vicious circle for themselves. As long as deacidifying, cleansing and detoxing the body flooded with harmful substances are not awarded top priority, hardly any one has the chance of becoming healthier. Some people are like a garbage bin overfilled with garbage so that the lid can’t be closed anymore. Tidying up is necessary so that the regulatory systems can become active again. We should not forget the biologic remedies and naturopathic measures to age actively for a longer time. With regard to improved public health it is necessary that naturopathy and orthodox medicine go hand in hand for the development of joint concepts and collaboration for the welfare of sick people.

As a result of his serious sufferings, the author started a 5 year study course of naturopathy in 1976. This allowed him to rectify his stressful health impairments quite quickly so that today, in 2009, he is healthier and livelier in total than he was 33 years ago! The long studies brought him to a totally new therapy in the holistic field. The many years of practice and the resultant successes confirmed the accuracy of this therapy path which he had turned to at the time.
Autor/in