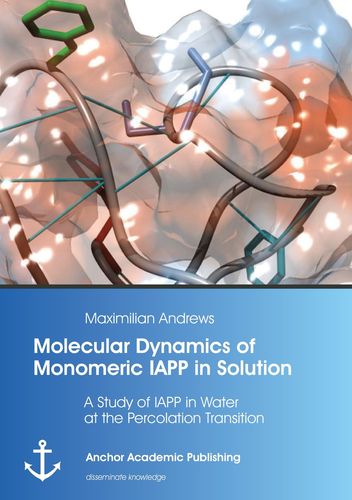 Molecular Dynamics of Monomeric IAPP in Solution: A Study of IAPP in Water at the Percolation Transition

Mehr erfahren
Beschreibung
Biological activity for most living organisms is at its highest where the percolation transition occurs; hence, finding such temperature range was of utmost importance. After having found such temperature interval, i.e., between 310K and 330K, conformational studies were performed on full-length human and rat islet amyloid polypeptide, hIAPP and rIAPP respectively, by MD simulations both for the reduced and oxidized IAPP moieties. Studying the monomeric forms of two very similar polypetides that present different amyloidogenic properties could shed light on the aggregation mechanism of human islet amyloid polypeptide; in fact, after hundreds of nanoseconds, above the percolation transition temperature, oxidized hIAPP 'folded”'into a compact structure that was about 10% smaller than the average value of the radius of gyration. Further studies were carried out on some in silico mutated hIAPP moieties in order to pinpoint key residues involved in the 'folding' of hIAPP. Three conditions were needed in order to observe this compact state: the presence of the disulfide bond; the absence of the P28 residue, found in rat IAPP; presence of aromatic residues, in particular F23.
Autor/in