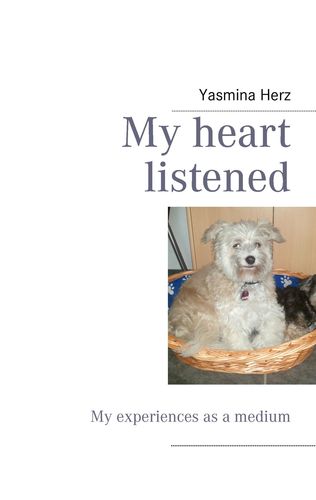 My experiences as a medium

Mehr erfahren
Beschreibung
I just asked the dogs whether they would like to eat some noodle soup. Both said: “Oh, yeeees.” There were even some pieces of chicken in it. Maybe that’s why they were keen on it. Smile. I must add that they normally get proper dog food but the noodle soup was left over and I don’t like throwing food away. Anyway, they were both eating and I went into the kitchen. When I came back, a feeling crept over me as if Nubee had eaten EVERYTHING even Lucky’s food. So I asked: “Was it good?”. And Nubee replied: “Yeeees.” Lucky said: “There was no meat in it and I don’t really like noodles that much.” Unfortunately, all the meat had landed in Nubee’s bowl. A little unfair I must admit. Then I asked Nubee: “Did you eat up Lucky’s food, too?” No reply. I asked Raffaela, my guardian angel: “What is wrong with her?” Raffaela: “She is very ashamed” Then I asked Lucky: “Did Nubee eat your food?” He said: “Yeeees. She is such a greedy pig!” Smile. I asked Lucky: “Do you want to eat some meat?” He: Yeeees hooray meat yippee!” At least that’s the way I understood it. I then gave him some meat out of a tin and he happily smacked his lips over it. He then thanked me for getting some in the end, because Nubee had eaten most of the noodle soup.
Autor/in